The Redclaw crayfish crayfish industry started in the late 1980’s using stock of unknown quality collected from the wild. In 2000, industry leaders came to the realization that the potential for faster growth was largely unexplored and without positive action, the potential for very significant improvement would never be realised . QDPI started a selective breeding program that was cancelled in 2004. In 2007, industry successfully applied to the Rural Industries Research and Development Corporation (RIRDC) for funding to undertake a five year Selective Breeding Project. 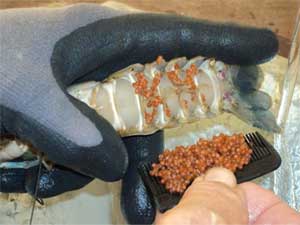 The research project was conducted by farmers under the supervision of researches from James Cook University (JCU). The project involved eleven families of redclaw crayfish populations being cross bred according to a Circular Mating Design.

Incubator technology was developed to ensure traceability and genetic diversity.  Broodstock from each cycle was selected from the fastest growing animals from the previous cycle. JCU monitored progress on the disease front by means of a series of pond surveys. (View RIRDC-Redclaw-selective-breeding-fact-sheets.pdf)

The project was successful in achieving all its objectives. Using the Circular Mating Design ensured genetic diversity into the foreseeable future. Selectively breeding for faster growth increased pond production by up to 100%. Using the incubator to produce disease free animals confirmed an earlier theory that generic diseases were contracted by hatchlings while being carried by the female.

The advances made by this project have paved the way for significant progress to be made by the Redclaw crayfish industry.

Not only has the project produced the “Tolga Strain” of superior growth rate Redclaw crayfish crayfish, but has also facilitated the development of “S3J Farming” method of growing Redclaw crayfish – see Learning from Research.

With this method, the farmers obtain disease free, genetically superior stock from the hatchery. The effectiveness and simplicity of this method has a very significant influence on the profitability of farming Redclaw crayfish.