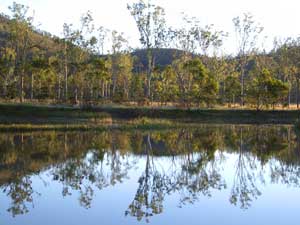 In the early days of Redclaw crayfish farming (not that long ago!), farmers, through inexperience, adopted practices that were at worst just plain wrong and often based on simplicity rather than optimum production. The industry has matured in recent years and has made a determined effort to shed its “cottage industry” image and take proactive measures to attain the status of a major player in the Australian aquaculture scene.

Traditionally, stocking redclaw crayfish ponds was an ad hoc affair at best, depending on what stock was available at the time. The method adopted by the particular farmer varied according to his conviction of what worked best for him. Producing juvenile Redclaw crayfish for stocking represented a considerable proportion of the time spent on the farm.  Generally speaking, three main procedures were used: 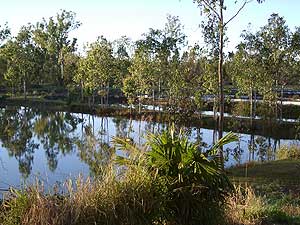 (1) Ponds were stocked with berried females (females carrying eggs) recovered from harvesting another pond or from a dedicated breeding pond. The females were either stocked directly into the pond or into a floating cage to be recovered later. The success of this method was dependant on the number and quality of berried females available which in turn was dependant on the season. Harvest was necessarily  inconsistent because it was tied to inconsistent stocking.  The method required pondage to dedicated to breeding that could be otherwise be used for production.

(2) Ponds were stocked with females and males, generally in the ratio of 4:1 and allowed to breed naturally. The success of this method was also season dependant and tied up stock that otherwise could be sold to market. The breeding was not coordinated and its degree of success was not known until harvest, this resulted in an erratic outcome and a wide spread of sizes. The larger Redclaw crayfish harvested from another pond were commonly used in this method with no assurance that they were not siblings 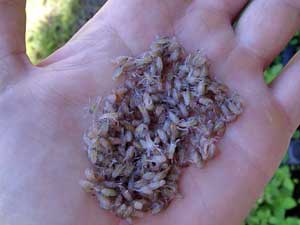 (3) Ponds were stocked with small Redclaw crayfish recovered from harvesting another pond, termed “juveniles”. There  is no way of determining the age of a Redclaw crayfish by looking at it, so in fact a proportion of these “juveniles” could well be runts. As in the other two methods, the season had a large bearing on availability of juveniles.

To summarise, these methods are labor intensive, season dependent, fraught with the danger of inbreeding, tie up unproductive pondage, waste salable product and lead to inconsistent and unpredictable results.

The development of hatchery technology and its adaptation to suit the characteristics of Redclaw crayfish opened the door to many possibilities which were explored as part of the Selective Breeding Project. By far the most significant of these was in fact a revolution in the way that Redclaw crayfish could be farmed.

Farming with craylings involves buying batches of craylings from the hatchery and stocking them into a pond. A crayling is a young Redclaw crayfish at the stage of development where it would naturally leave the mother. It is a convenient and logical stage to transfer them from the hatchery to the farms. The hatchery supplies animals of known quality bred from the stock produced in the Selective Breeding Program, and can do so all year round allowing maximum use of the premium summer growing season. Because the craylings are produced in an incubator they do not carry inherent diseases common to most Redclaw crayfish populations facilitating further improvement in growth rate.

Ponds can be stocked with animals all the same age on the same day. The hierarchy effect of larger animals inhibiting the growth of smaller ones is not an issue. The biomass of the pond is calculable at any time as there is a known starting point, allowing the use of a designed feeding regime. Although Redclaw crayfish do still grow at different rates, the spread of sizes at harvest is not as pronounced.

The labor to stock a pond is negligible, water use and the energy to pump it is reduced, premium stock otherwise used for breeding can be sold at a premium price and effort can be concentrated on perfecting growout methods. Fast turn around of ponds is possible using “batch in – batch out” farming methods recommended by Biosecurity officers.

To summarise, S3J Farming is a simplified method of farming Redclaw crayfish which in fact brings us into line with the practices of other aquaculture industries. The method is labor saving, cost effective and allows significant increases in productivity and consequently profitability.

In concert with the Selective Breeding Program, two farmers have decided to diversify into hatchery operations. One hatchery is in full production while the other is still in the construction phase. Both will offer supply of S3J / craylings facilitated by heated winter breeding sheds.  Farmers thinking of purchasing S3J should be reminded that they are not able to be stored (like rolls of toilet paper!) and prior notice of your requirements is necessary to allow forward planning of hatchery operations.